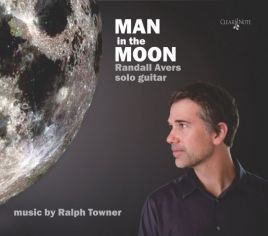 Ralph Towner's "Maddalena Variations" premiered at the Texas Music Festival in 2011 by classical guitarist Randall Avers. The Maddalena Variations, and the “Prelude” which accompanies the Variations, had been unrecorded until 2012 with the release of Avers' "Man in the Moon."  The Variations were composed and performed by Ralph Towner in tandem to a theatrical performance in Italy written by his wife, and derived from a text by Marguerite Yourcenar which tells a story of unrequited love involving Mary Magdalene in her older years.  The Variations are remarkable in that they seem to be a “coming home” for Towner to the more traditional classical forms in which he was originally trained in the 1960s.  The Variations “2 Grazioso” and “1 Allegro” especially seem to diverge from Towner’s usual compositional spirit of joyful exultation into that of a rather dysphoric ambiance, but entirely in keeping with the mood that Yourcenar had sought to cultivate in her dark drama.

This collection of scores includes the Prelude and all 4 Variations, 20 pages in all, and is an instant digital download.  The 30 second mp3 samples are performed by Randall Avers.

Proceeds from the sale of this score go directly to Distant Hills Music, Ralph Towner's publishing company.  This score has been personally transcribed by Ralph Towner.